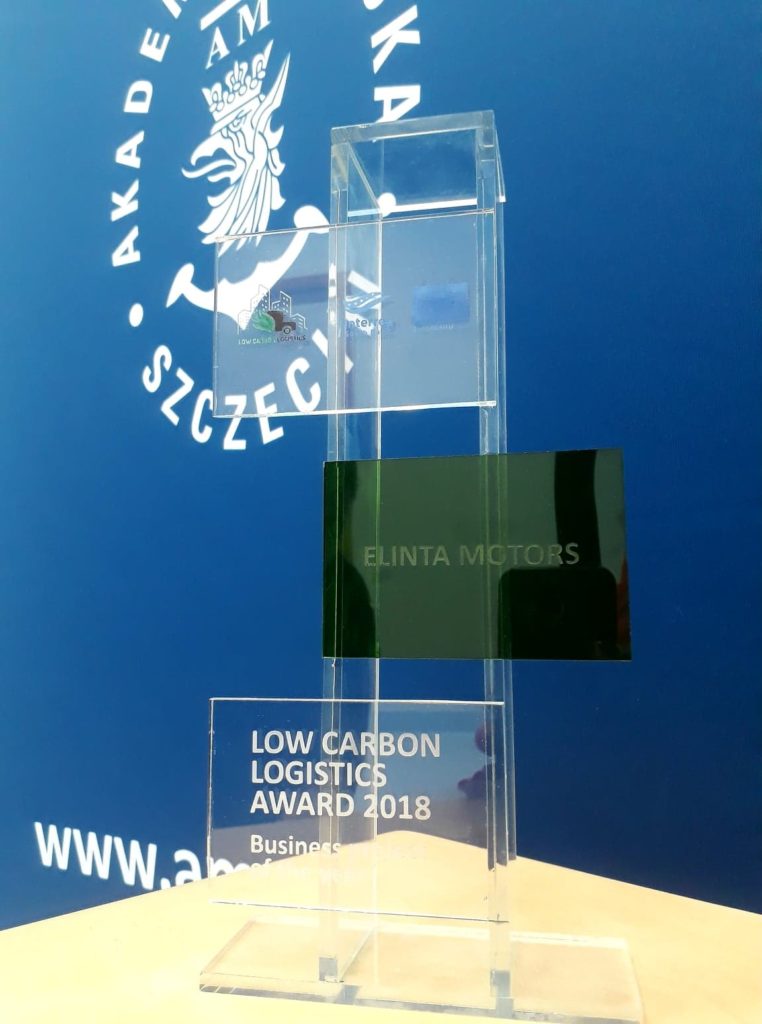 International conference GREEN CITIES: GREEN LOGISTICS FOR GREENER CITIES, held in Szczecin September 2018, presented and awarded the most innovative businesses, NGOs and municipal initiatives that work to cut down on greenhouse gas emissions, traffic volumes, accidents and other transportation-related issues.

Awards inspired by challenges of the future

Ieva Budraite, the Executive Director of Green Policy Institute, claims that the inspiration for the awards came from predictions of a future that has no place for transportation that pollutes. 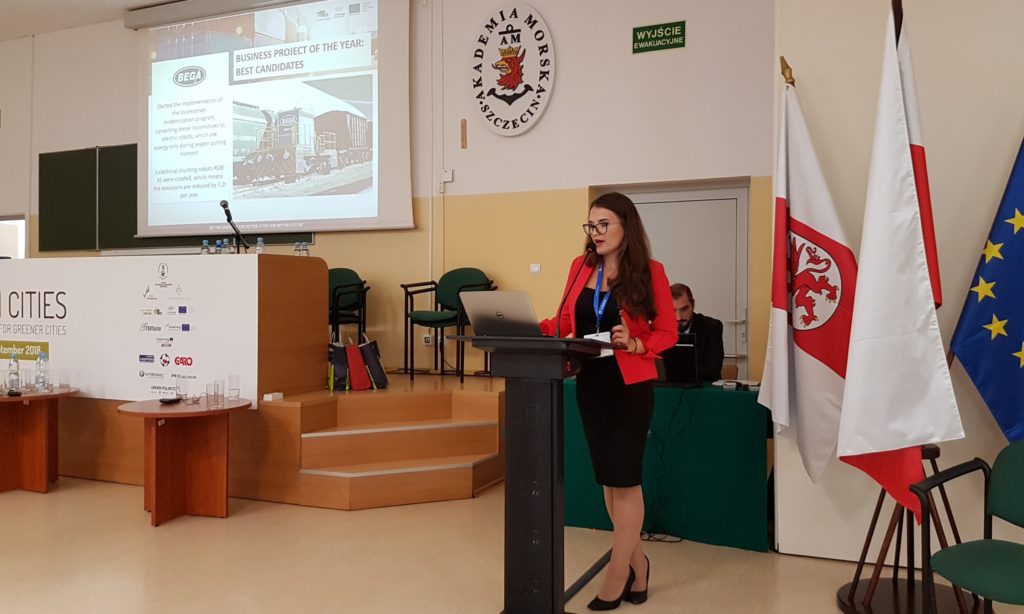 “It is estimated that the transportation sector will grow massively by the year 2050. In order to avoid the consequences of growing traffic volumes, we must implement low-emission solutions such as freight consolidation, route optimization and environmentally friendly vehicles. Applying green solutions to the area of logistics would contribute to cutting down on greenhouse gas emissions, traffic volume, traffic accidents and other related issues.  By hosting the Low Carbon Logistics Awards, we wanted to bring together the leaders in environmentally friendly change from businesses, the public sector and NGOs in four South-Baltic countries. Their initiatives should become an example for those who seek sustainable solutions for business and changing cities to follow,” said Ieva Budraitė, Executive Director of Green Policy Institute.

Attention to projects that create economic, environmental and social benefits

The participants in the awards had the chance to demonstrate their achievements, be noticed and evaluated by an international audience. The winners received the privilege to use the Low Carbon Logistics Awards mark. It is expected that this mark will become a new symbol for recognizing and appreciating low carbon logistics.

The selection of winners was a two-step process, first at the national, and then at the international level. A committee of experts selected commendable initiatives and projects that made tangible contributions to creating economic, environmental and social good. 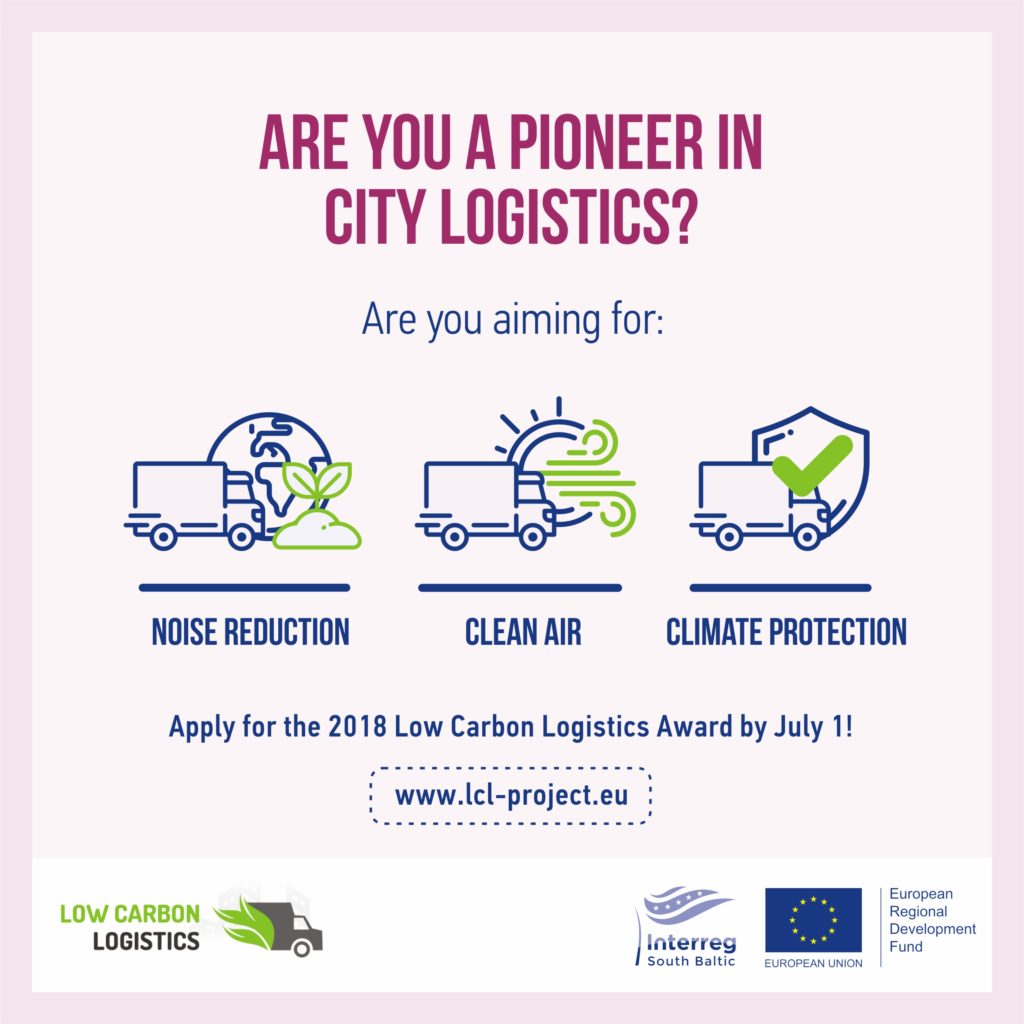 The initiatives presented in the awards are aimed at implementation in the South Baltic region. Germany, Sweden, Poland and Lithuania are cooperating in the Low Carbon Logistics project, the goal of which is to lower pollution levels in the regions of Neringa (Lithuania), Rietavas (Lithuania), Olofström (Sweden), Stargard (Poland) and Bad Doberan (Germany) by applying environmentally friendly solutions.

The Baltic Sea region is unique in its biodiversity and natural beauty – however, it is badly affected by pollution. Transportation and logistics are the areas of activity that do most of the damage. Therefore, environmentally friendly logistics solutions are becoming ever more important in the region. A similar innovative and environmentally approach is what many of the European metropolitan areas need as well.

The application process for the Business Project of the Year award was open to any business working in the sphere of logistics: freight vehicle manufacturers and distributors, expeditors and logistics innovators. 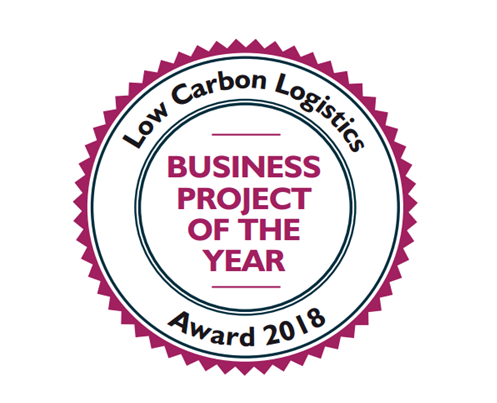 The biggest tendencies among business were the development of environmentally friendly transport and its application in transporting goods. Two Lithuanian companies stood out among the best in this category. One of them won the Business Project of the Year award. It was claimed by Kaunas-based (Lithuania) company Elinta, which overcame competitors from Sweden, Germany and Poland.

The Lithuanian enterprise has developed 3.5-7.2 ton electrically powered vans and hybrid trucks. The iPHEW hybrids manufactured by Elinta can drive for 50 kilometers solely on electrical power. Meanwhile, a traditional diesel engine can cut down fuel consumption up to 70% when working in tandem with an electrical engine – without sacrificing range. According to the company’s estimates, a single iPHEW can save 28-42 tons of carbon emissions over 10-12 years.

Elinta was competing with finalists Meck-Schwizer from Germany and sea freight company BEGA from Klaipeda (Lithuania).

Meck-Schweizer was nominated for a regional drop-shipping system that encourages supporting local food producers and lessens carbon footprint. The company has implemented program that connects regional food producers, manufacturers and sellers. That way, the customers can get fresh, locally grown or manufactured produce. The orders are shipped from the producer or manufacturer directly to client. Deliveries are made via an electrically powered van that uses solar power to refrigerate food.

Among the best in the Business Project of the Year was the Klaipeda-based sea freight company BEGA. It has started a locomotive modernization program that aims to refurbish diesel engines into electrically powered robots that only use energy when pulling train cars. The three ROB-45 robots manufactured by the company have cut down yearly emissions down to 7.2 tons. 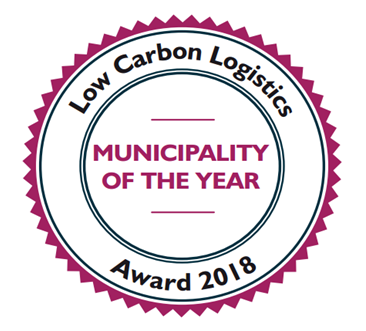 The awards also had a focus on initiatives that foster positive social, environmental and economic changes that are tied to logistics solutions at the municipal level.

The Municipality Project of the Year award went to the project from the southeastern Swedish municipality of Ystad. This city on the Baltic coast sees two biogas-fueled vans deliver 45 tons of goods to 350 inhabitants ever week.

The suppliers drop off their goods at a consolidation center. There, they are sorted and handed off for delivery to the consumer. This method of delivery allows for the delivery of goods to schools, kindergartens and retirement homes in a single trip. It was observed that the resulting fall in traffic volume has resulted in increased safety in the area.

On the first year of this project, the towns of Ystad, Tomelilla and Simrishamn saw the new delivery model cut down the number of stops in the delivery chain from 26500 to 7000. This model was adopted by more than 40 municipalities in Sweden. It is expected to see this system spread to other municipalities across the country.

Among the nominees for the award was the municipality of Neringa. The award committee of logistics experts from Lithuania, Poland, Germany and Sweden rated highly the local ecological fees in the Neringa municipality, aimed at lessening the amount of vehicle traffic that enters the Kuronian Spit National Park. The eco toll amounts to 20% of income for the Neringa municipality. Said funds are used to improve the local infrastructure and similar developments. 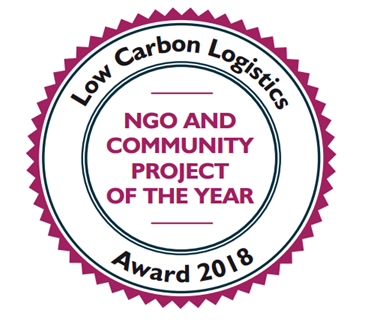 NGOs take part not only in implementing sustainable logistics, but also in ensuring the citizens’ rights to a clean environment.

The NGO Project of the Year was declared to be the initiative by Poznan’s (Poland) Instytut logistyki i magazynowania (The Institute of Logistics and Warehousing). SULPiTER is its project that aims to improve the planning of urban freight shipping in Central Europe. The institute also consults decision makers and prepares sustainable logistics plan for cities.

Among the nominees were the Klaipėda based initiative “Už demokratiją ir ekologiją“ (Klaipedians Initiative for Democracy and Ecology – KIDE) and the Polish Alternative Fuels Association.

KIDE is aimed at raising awareness and influencing decision makers on the topic  of the Klaipeda State Seaport expansion project, which is projected to increase freight traffic on both roads and railroads (by 13.000 trailer trucks per day). It is hoped to ensure a more environmentally expansion of the ground-based freight.

The Polish Alternative Fuels Association (Polskie Stowarzyszenie Paliw Alternatywnych – PSPA) was pointed out for its exemplary conduct in the area of logistics. The organization works to analyze electric car infrastructure in Poland, support the establishment and expansion of electric transportation network for both passengers and freight, and encourages the use of alternative fuels in the transportation system.The awards, initiated by Green Policy Institute (Lithuania)